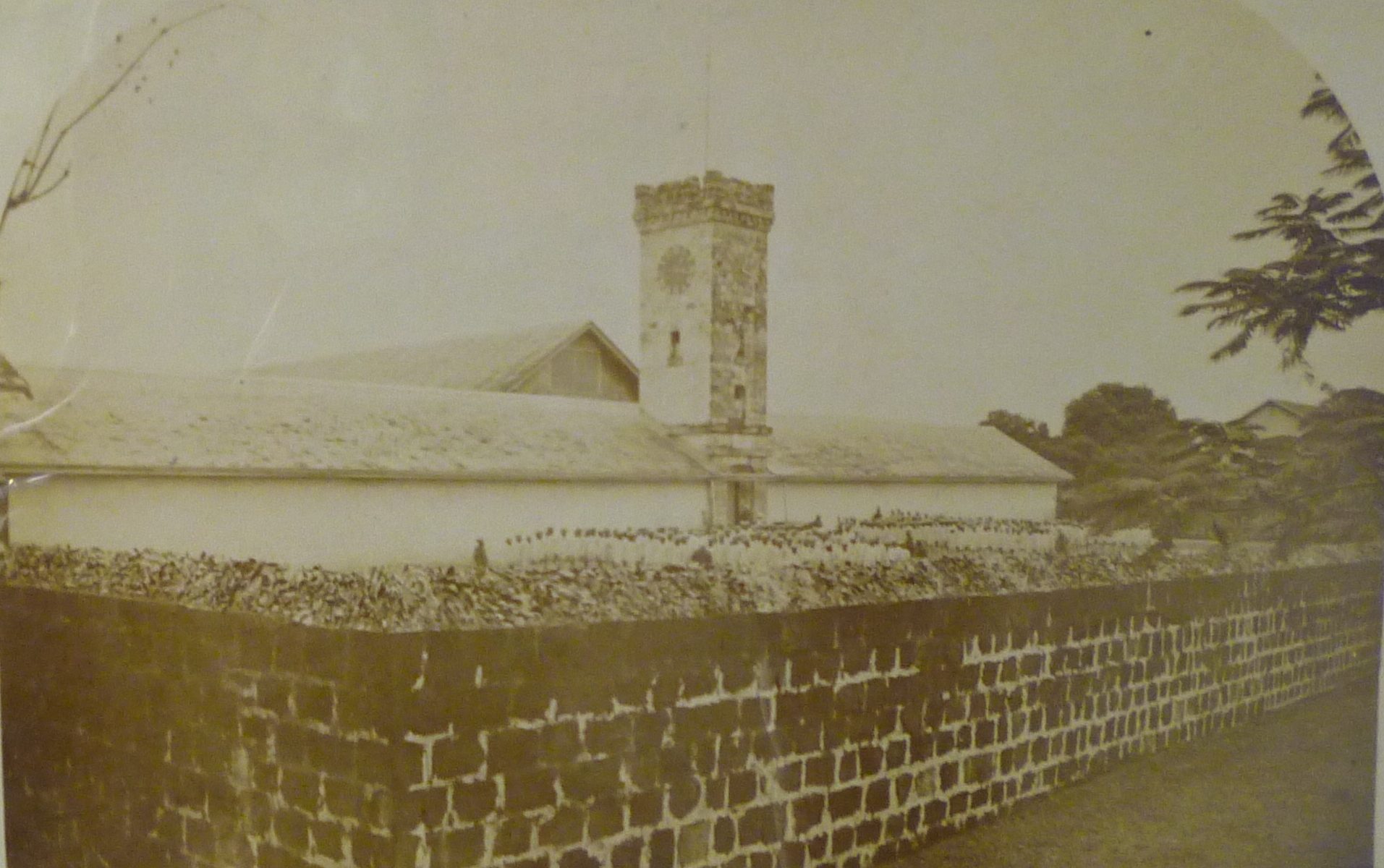 As has become evident as the Covid-19 pandemic extends its grip all over the world today, jails are environments in which infectious diseases can be easily spread. This is especially the case in overcrowded conditions, most especially where prisoners share accommodation and washing and toilet facilities. Historically, outbreaks and epidemics of diarrhoea, dysentery, respiratory illnesses, and whooping cough were the most prevalent diseases in the colony of British Guiana, including in prisons. To these can be added the mosquito-borne illnesses malaria and yellow fever. Limited levels of healthcare and poor sanitation within the prison system meant that after the British began its jail building programme from the 1820s, containing the spread of disease was an ongoing problem. In Her Majesty’s Penal Settlement (HMPS) Mazaruni in 1871, for example, over a third of the prisoners in hospital were suffering from diseases incurred by overcrowding, bad ventilation, and a ‘total lack of any sanitary measures’. The following year, fears were expressed that in the event of an epidemic, Georgetown jail was so overcrowded that the consequences would be disastrous. In fact, this scare underpinned a call for a reduction in the number of prisoners overall, though this did not follow until the first part of the 20th century.

Despite this recognition, a general lack of concern regarding the welfare of prisoners ensured that epidemics continued to plague the prison system in the decades that followed. Furthermore, once an infectious disease entered the system, the authorities were unable to keep it contained. For example, following an initial case of influenza at HMPS Mazaruni in 1895, recurring outbreaks of the disease were reported in Georgetown, New Amsterdam and Suddie prisons until 1899. The medical officers however, routinely denied any connection between ‘prevalent diseases’ and living conditions. The outbreaks were, instead, attributed to the debilitated condition of the inmates prior to their admittance to prison. This, the medical officers noted, left many prone to catch the disease after only the ‘slightest exposure to chill’. It would be almost 20 years before colonial prison authorities were willing to take responsibility for the conditions that facilitated the spread of infectious diseases.

In September 1919, the Acting Surgeon-General of British Guiana J.H. Conyers submitted his usual annual report to Governor Sir Wilfred Collet. In it, he noted the prevalence of the ‘influenza epidemic’, or what we now commonly refer to as the ‘Spanish flu’. What had started out as a mild strain in August 1918, had by November become a severe epidemic that had penetrated the furthest reaches of the colony, including especially dwellings on the plantations. The hospitals of Georgetown and New Amsterdam were, Conyers reported, ‘sorely tested’. In words that resonate today as the Covid-19 virus challenges health systems all over the world, he concluded that the medical service had only managed the situation through deferring all non-urgent operations and other hospital work. Efforts were also made by the health authorities to isolate patients, and their visitors, to eliminate the possibility of the spread of the infection by acute carriers. We now know that the Spanish flu killed between 25 and 30 million people worldwide. The most devastating pandemic in modern history, it affected the whole of the Caribbean, including the colony of British Guiana. It was estimated at the time that out of a total mortality of 8,887 in the months of December, January and February, influenza was responsible for 6,378 deaths. Historian David Killingray puts the figure even higher, at perhaps as many as 20,000.

The influenza pandemic also impacted on the colony’s prisons. From the first recorded patient in Georgetown jail, in December 1918, a virulent strain of the disease spread rapidly throughout the prison population. The transfer of inmates between prison sites meant that cases of the disease emerged soon after in Mazaruni, New Amsterdam, and Suddie. In comparison to previous years the total number of deaths recorded tripled. In 1917, 17 inmates had died in hospital. In 1918, the figure was 30, or 6.5% of the daily average (i.e. the number of prisoners in jail on any given day, not the total number admitted during the year). Although we do not have details of the cause of all these deaths, the Acting Surgeon-General noted the pandemic was to blame for ‘a considerable part’. It was also noted, at the time, how prompt preventive measures by prison authorities, such as the isolation of those displaying symptoms, and improved sanitary measures helped to prevent an even greater spread within the system. This was a difficult task given that fever and dysentery was rife amongst members of the prison staff. Most significantly, however we have no sources that indicate how prisoners and prison officers – or the population at large – understood and experienced the pandemic. Whatever the case, we do know that the overall mortality from the influenza pandemic in the colony was high, as 17.7% of those who contracted the disease died. This figure rose to 21.1% in the colony’s prisons. This means that although a relatively small number of inmates died, they died in larger numbers than the free population. Furthermore, the colonial authorities used prisoners to dig graves in the colony’s capital of Georgetown.

In the wake of the outbreak, a concerted effort was made by the prison system to enhance levels of hygiene. From this point a small group of prisoners were designated the task of improving sanitary measures within each prison. Efforts to isolate sick inmates and disinfect their cells were also strictly adhered to, although these attempts were not always successful in impeding the spread. Medical officers were often required to convert association wards into temporary hospital bays due to the number of cases, and the lack of suitable medical facilities. At a senior level further attention was also paid to reducing contaminated water supplies, and the breeding of flies, common sources of dysentery and diarrhoea. Yet, despite these efforts intermittent outbreaks of disease continued to plague the colony, although never again on the scale experienced in 1919. For example, there was a localised epidemic at the end of 1933. This caused higher rates of morbidity and mortality overall across the whole colony, but for reasons which are not entirely clear did not impact on prisons.

Clare Anderson is Principal Investigator, and Kellie Moss is Research Associate on the ESRC GCRF project MNS disorders in Guyana’s jails, 1825 to the present day.

Papers relating to the improvement of prison discipline in the colonies (London: Harrison and Sons, 1875).