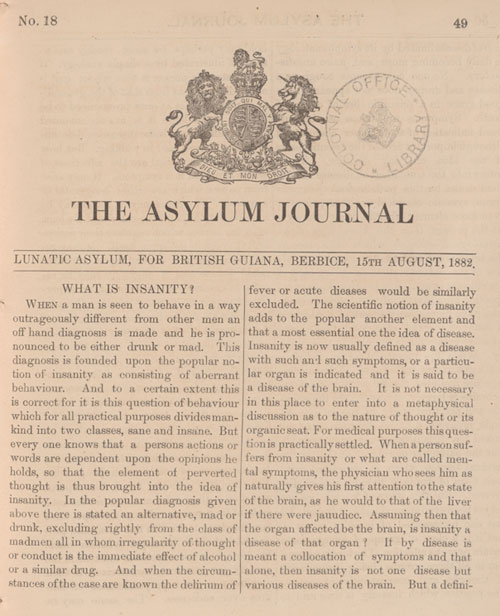 As previous posts have highlighted, the use of alcohol, cannabis and other substances form a major part of ongoing discussions about mental health and mental illness in Guyana in the twenty-first century. Concepts relating to the problematic use of substances also shaped historical understandings of mental health issues in British Guiana and the Caribbean. In two linked posts, I aim to explore how alcoholism in particular was understood during two key junctures in the development of mental health infrastructure in the region: the late nineteenth-century period of asylum reform led by Dr Robert Grieve in British Guiana (part I); and the foundational conferences of the Caribbean Federation for Mental Health in the mid-twentieth century (part II).

While the terms alcoholism and alcoholic are still widely used and familiar today, in both lay and therapeutic contexts, clinical diagnoses of problem drinking have long been moving away from these terms. The fourth edition of the American Psychiatric Association’s Diagnostic and Statistical Manual of Mental Disorders (DSM-IV), published in 1994, included alcohol abuse and alcohol dependence as two distinct disorders, while the more recent DSM-V of 2013, integrated the diagnostic criteria for both into one “alcohol use disorder”, with gradations in terms of its severity. Public health bodies such as the WHO have increasingly shifted to the language of harmful drinking and alcohol-related harm instead of alcoholism. There are multiple reasons for these developments; an important one to highlight here is that alcoholism as a concept has, since its inception, been a moveable feast.

By exploring the development and application of the alcoholism concept through the history of mental health in British Guiana, these two linked posts constitute a preliminary attempt to write British Guiana into a major aspect of the global historiography of alcohol in the nineteenth and twentieth centuries. The emergence and spread of medicalized understandings of problem drinking and associated concerns about public health have been a major focus of this historiography (Levine 1985; Sournia 1990; Piccato 1997; Tracy 2005; Toner 2015). Until the nineteenth century, habitual drunkenness was largely understood as a moral failing. Across the nineteenth century, new terms like inebriety, dipsomania, addiction and alcoholism diagnosed certain drinking patterns and practices as medical or psychiatric problems. Moral judgements and social prejudices were still embedded within these new concepts, and they varied in their definitions and applications from place to place. In British Guiana, Robert Grieve devoted many pages of the Asylum Journal (1881-86),produced while he was Medical Superintendent of the Public Lunatic Asylum in Berbice, to analysing the connection between alcoholism and insanity. His interpretation combined analysis of the physiological and neurological effects of alcohol with theories about racial difference, degeneration and the impact of social dislocation. By the 1950s and 1960s, Alcoholics Anonymous, formed in the United States in 1935, had established a significant presence in the Caribbean. The “disease” concept of alcoholism, which Alcoholics Anonymous helped to popularise in lay terms around the world, featured in the early conferences of the Caribbean Federation for Mental Health, alongside broader interpretations of problem drinking that considered the psychological and social legacies of colonialism and ongoing processes of rapid socio-economic change.

Part I: Intemperance, Alcoholism and Insanity in the late Nineteenth Century

Rather than using alcoholism to denote particular patterns of alcohol use, late nineteenth century medical practitioners in Europe, North America and elsewhere typically used the terms alcoholism or chronic alcoholism to describe the range of physiological, neurological and psychological conditions that alcohol consumption could cause. Physicians in British Guiana followed a similar pattern. They made few and only vague attempts to describe an “alcoholic” pattern of drinking behaviour and more consistently employed the terms “drunkards”, with “intemperate” or “vicious” habits in the use of alcohol to convey prolonged or excessive patterns of consumption. In quantifying excess, Robert Grieve ventured some specific observations. In discussing the importance of good diet for general physical and mental health, he stated that the quantity of alcohol consumption “within which safety lies is very limited, not more than a wineglassful of ordinary spirits or its equivalent in the twenty-four hours” (Asylum Journal, 1881). Case histories presented in the journal sometimes described heavy drinking patterns that led to specific symptoms as alcoholism. A 41 year old migrant from Barbados, diagnosed with syphilitic insanity, reported that “he had been drinking freely for some time and he rather proudly declared that he could take a bottle of strong rum without staggering”. Grieve subsequently noted that he had been suffering hallucinations upon his admission to the asylum, “no doubt dependent upon the alcoholism under which he then laboured” (Asylum Journal, 1882). Dr Godfrey, in Georgetown Hospital, was initially stymied in treating a patient suffering from shooting pains and paralysis of the arm, which the doctor suspected had been caused by excessive drinking. The patient, a 39 year old sugar distiller, claimed to drink only “a glass or two of alcohol during the day”, but his wife subsequently informed Godfrey of a “clear and exact history of alcoholism which had been going on for some time”. On giving up drinking altogether, the patient slowly recovered over a period of several months (Transactions of the British Guiana Branch of the British Medical Association, 1891).

Medical and psychiatric experts more consistently attributed to intemperance in the use of alcohol, various physiological and neurological imbalances that caused different forms of mental illness. Writing in the Journal of Mental Sciences, James S. Donald described intemperance as “one of the most fertile causes” of “lunacy” in British Guiana, singling out the consumption of high-strength rum, known as “high wine”, for producing “cerebral lesions” over time (1876). Grieve wrote quite extensively in the Asylum Journal about the prevalence of Bright’s disease (an out-of-use term for various kidney diseases) amongst patients of the Berbice asylum, where it was a leading cause of death over several years. He attributed the comparatively high rate of Bright’s disease within the asylum to the long term effects of malaria, poor diet, and intemperance in the use of alcohol, and also argued that drinking alcohol compounded the negative effects of malaria and malnutrition on the kidneys. Further, he postulated a causal link between Bright’s disease and neurological changes that led to insanity and hence, admission to the asylum. For example, in a case history of a 50 year old female patient, “said to be of intemperate” habits, Grieve traced a causal link between her kidney disease and her “cerebral excitement”, which manifested on admission in symptoms such as incoherence, delusions, violent and erotic outbursts, severe head pains and memory loss, and ultimately led to her death via a brain haemorrhage. He concluded the case history: “we have therefore a case of insanity arising directly from Bright’s disease and remotely from intemperance” (Asylum Journal, 1881).

Finally, in exploring the causes of mental illness, Grieve pondered connections between intemperance and theories of racial difference, degeneration and social dislocation. Grieve sometimes attributed an inherited predisposition greater causal weight to mental illness than environmental or lifestyle factors, but all three could be linked through the theory of degeneration. “Proclivity to any disease is influenced by all the previous conditions of life not only of the patient but of his ancestors”, he argued, and that insanity as a disease could often be understood as the last step in the “evolution of degeneration of which too often overindulgence in drink forms the starting point” (Asylum Journal, 1881). Assessing the numbers of patients admitted to the asylum in Berbice up to 1880, Grieve explained that there was a considerably higher proportion of migrants than creoles – a distinction based on being born outside or within British Guiana – likely as a result of having less of a family support network to provide care during periods of mental distress. Within the category of migrants, Grieve further attributed a disproportionate number of African patients in the asylum population to racial difference, in two senses. First, the disorientation of being displaced from a “savage” lifestyle in Africa to the comparatively high “civilisation” of a British colony. And second, as a “race which possesses less of civilisation than any other seen in the Colony”, he argued Africans were unlikely to suffer mental illness because of “mental strain”, a common explanation of insanity in Europe at the time. Instead, the high rate of Africans being admitted to the asylum in British Guiana was taken as evidence that “vice”, especially in the use of alcohol, was a “more active agent in the manufacture of the insane” than “mental strain” (Journal of Mental Sciences, 1880). While so-called ‘moral causes’ of insanity – including anxiety, domestic strife, the strains of modern life – predominated in English cases of insanity, Grieve suggested that in British Guiana such problems weighed little on the minds of people of either African or East Indian descent. Amongst these groups in the colony, alcohol and cannabis (or gange) were respectively considered the leading causes of insanity (Asylum Journal, 1882). The close connection Grieve drew between African asylum patients and alcohol use was also linked to their higher fatality rate as patients compared to other ethnic groups, as a consequence of co-morbidities between cerebral abnormalities, chronic heart disease and Bright’s disease (Asylum Journal, 1883).

By the time the Caribbean Federation of Mental Health was formed in the 1950s, medical and psychiatric professionals around the world increasingly viewed alcoholism as a mental illness or physiological disease in its own right, and the term had become a familiar part of everyday language in discussing problem drinking. Come back to the blog for Part II of this post to find out how such ideas were debated at the Caribbean Conferences for Mental Health in the 1950s and 1960s.

Deborah Toner is an Associate Lecturer in the school of History, Politics and International Relations, University of Leicester.