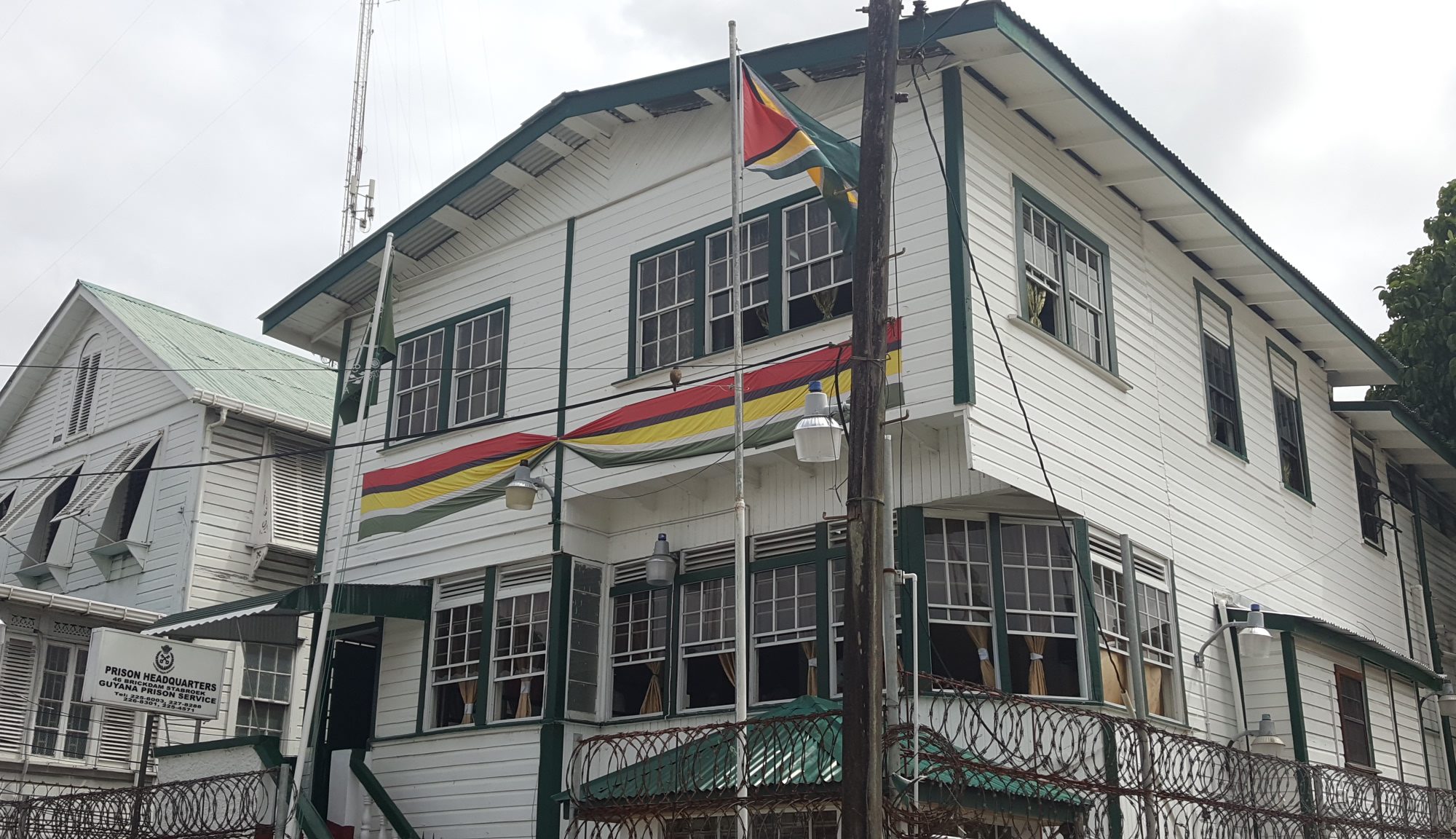 The ‘Penal System’ is said to have two functions: the protection of society and rehabilitation. These are set out to sometimes be at odds and also both undermined by similar forces.

Last October, during an event held to mark Guyana Prison Service (GPS) week, Director of Prisons Gladwin Samuels addressed the importance of prisoner rehabilitation. He said that the punitive measures favoured by many do not help to increase security in the long term. Rather, Samuels explained, rehabilitation benefited not only prisoners but was also necessary for the security of individuals and society.

Samuel’s vision of rehabilitation includes academic and vocational training, alongside programmes for addressing the psychological and social needs of prisoners. The attempt to facilitate a robust rehabilitation programme faces a number of barriers within prison. This includes a lack of funding for rehabilitation programmes, issues of attracting and retaining qualified educators and trainers, overcrowding and a lack infrastructure suitable for such programmes. Some of these issues have existed for a very long time but have been exasperated in more recent years. This is in part because of fires which destroyed parts of two facilities over the past four years which led to an even further reduction of space available for holding prisoners. As a result, cafeterias and training areas have been turned into cells in a number of the facilities.

The long term success of rehabilitation programmes is challenged by what ex-prisoners face once released from prison. For stigma against ex-prisoners remains along with decreased employment opportunities. Some former prisoners also face a lack of sustained support from family and friends.

The present goals for rehabilitating prisoners and the barriers faced echoes issues faced by GPS in the 1970s. In the summer of 1974 the ‘Crime and the Penal System in Guyana’ conference was hosted by the University of Guyana. This was the first such conference held in Guyana and the second in the ‘Caribbean region.’ It brought together researchers and practitioners to explore studies concerning crime as well as the experience had on the ground by those working in the criminal justice system and prisons. The aim was to create a ‘cooperative approach’ among the various ‘branches of the criminal justice system’ in Guyana in order to better face the issue of crime in society.

At this conference Edwin Pratt presented a ‘Report on the Operation of the Guyana Prison Service’ which had been prepared by the staff of the GPS Training Unit. The report began by outlining what they felt was the purpose of the ‘penal system’ which is outlined in the quote at the beginning of this blog. The report explains that the tension between rehabilitation and security is in part due to prison infrastructure. For maximum security prisons were set up to keep prisoners inside and did not have the facilities needed for the ‘meaningful rehabilitation of inmates.’ It explained that a certain amount of freedom was needed in order to bring about true rehabilitation which was in conflict with the aim of maintaining maximum security.  Furthermore, a lack of finances meant that there not enough money to run an effective rehabilitation programme or maintain security. The report called on the government to make ‘the penal system’ more of a ‘priority.’

Later on in the report is a description of prisoners as a ‘section of the nation’s human resources.’ The way in which prisoners are described here gives some indication of an inclusive idea of citizenship in which all members of society should contribute to the nation. These ideas, at least in part, stretched to approaches to the treatment of those who had been convicted of crimes and imprisoned. This focus on the nation, which was less than a decade old, was also found in the desire to use ‘modern’ methods of rehabilitation as opposed to colonial forms. Interestingly, these new forms were in part learnt from prison officials in Britain, Guyana’s former coloniser. And while these methods offered a shift away from what had come before, they did not provide a comprehensive critique or alternatives to the use of prison for the punishment and reform of those convicted of crimes.

And yet, the focus on modern forms of rehabilitation did require a new way of thinking among prison officers. In the report, ‘a purely punitive traditional philosophy’ is set in contrast to ‘the modern concept with its emphasis on the rehabilitation of the inmates.’ The emphasis on incorporating ‘modern techniques of rehabilitation’ was thus said to necessitate the recruitment of ‘suitably qualified and interested persons.’  This call for improvement can thus be seen as being part of a process that had already begun. For example, some changes were said to have already been made with regards to the ‘promotion to the rank of Principal Officer and above.’

How was rehabilitation conceived in the 1970s? It involved ensuring the physical and mental health of prisoners, instilling a firm work ethic, providing religious support, giving individuals the chance to gain vocational and academic training, and providing opportunities to play games and participate in sports and the arts. These programmes were seen as being important for keeping prisoners busy while in prison as well as teaching them new skills and habits to prepare them for life after prison. In this we can see both change and continuity within the system of rehabilitation that had come before. Critically, the historic focus on labour continued as the majority of most prisoners’ days were spent working.

Vocational training was ideally meant to form a part of this labour. The report explains that attempts were made to align work assignments with prisoners’ ‘interest, abilities, training needs and trustworthiness.’ However, a lack of training facilities meant that this alignment was not possible with ‘training in the various trades [being] incidental rather than deliberate.’  Also noted was an emphasis on ‘production at the expense of positive training.’ So both an absence of training and a focus on production meant that many prisoners did not receive skills training that would assist them after they left prison.

As evidence of this focus on labour, the report explained that at New Amsterdam and Mazaruni prisons most inmates were employed in agriculture, even though the majority were from urban areas and not interested in agriculture because they would not be returning to a place where they could use these skills when their sentences were done. It was suggested that the emphasis of the agricultural programme needed to change in order to ‘bring about [a] change of attitude and emphasis[e] self-sufficiency.’

Another issue that obstructed rehabilitation aims was overcrowding. The numbers of people incarcerated at Georgetown Prison was described as ‘alarming’. The report explained that the prison, which was meant to accommodate 278 people, was ‘housing almost twice the number that it should normally hold.’ Such conditions were linked to ‘social and health problems.’ New Amsterdam was noted as having ‘acute’ overcrowding and Mazaruni, though described as being ‘far from ideal,’ was said to be better than the other two sites as it held 418 men who each had their own cell. The reports explains that the increase in the prison population hadn’t been met with ‘additional physical accommodation.’ The report offered no consideration of the benefit of reducing the number of prisoners who came to jail in the first place.

Despite these challenges, there were attempts to carry out some programmes even when this fell short the ideal. For instance, education aims included teaching reading to illiterate prisoners as well as providing resources to explore the arts and general interests. Yet, in 1974, there hadn’t been a trained teacher ‘for some time’ with the role of teaching those who were illiterate or who had low literacy levels being the responsibility of ‘a non-specialist member of the prison staff.’

Other education aims had more success. Basic arithmetic was taught, while those who were already literate were facilitated in their studies which included assistance in receiving books and taking exams. Prisoners were given wide scope of what they pursued with education not being narrowly fixed to the process of formal education. The report noted that ‘a prisoner is permitted to pursue any area which is educational in the broadest sense in order to stimulate healthy interests and enlarge his mental outlook.’   As well as individual pursuits, prisoners were able to participate in group events that happened after work such as ‘concerts, debates and plays.’

This report shows GPS’ desire to bring about change by instituting ‘modern’ methods of rehabilitation for prisoners in the 1970s. The attempts were made to incorporate new methods of rehabilitation were hindered by a number of factors including: the maximum security nature of prisons, the focus on labour as production, overcrowding, an inadequate number of trained officers and a lack of funding. This period shows that while an attempt was being made to shift away from colonial forms of imprisonment, the legacies of this system remained in the prison infrastructure and punitive approach to prisons and prisoners that many still had.

Although there are several parallels between now and the 1970s there are of course differences as well. All three of these maximum security prisons are still in use, though they have been joined by two other sites at Timehri and Lusignan. Despite this expansion of facilities, overcrowding remains a significant problem. Both the structure of most prison sites and the numbers of those in prison make it difficult to find adequate and suitable space for rehabilitation programmes. Insufficient funding for rehabilitation programmes is also an issue that is yet to be fully addressed.

The 1974 report notes how some saw the protection of society and rehabilitation as being at odds. Yet both the report and Samuels explain that rehabilitation is necessary for the security of society. Most prisoners have a fixed sentence after which they leave prison. Therefore, the question of security depends in part on recognising these men and women as members of society. The stigma faced by ex-prisoners impacts rates of reoffending by keeping many of them on the margins of society. This adds to insecurity in society by creating more rather than less chances of recidivism.

The author would like to thank Mellissa Ifill for her feedback on this blog.

Kristy Warren is a research associate on the ESRC GCRF project Mental Health, Neurological and Substance Abuse Disorders in Guyana’s Jails, 1825 to the present day.