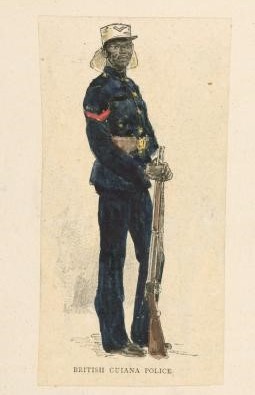 “Left Plantation 41 for Fort Wellington. As I baited my horse at the police station here, I heard a loud commotion outside of the station house. Upon enquiring a reason for such a commotion, I saw a group of about eight women and one young man only 18 years old. This young man named Georgie seemed in great mental distress. He claimed to be the Governor of the colony and many times his ramblings were incoherent. The women were pleading with Stipendiary Magistrate De Groot for help and when they saw me turned their pleadings also to me. One woman, whom it was later revealed to be his mother, stated that her son had always behaved in this manner for years, however of late this behavior is daily. After much back and forth and me intervening by speaking to the young man, Stipendiary Magistrate De Groot placed him in the small lockup at Fort Wellington for a few days at which time I am sure he would return to his normal self.”

This extract taken from the Stipendiary Magistrate C.H. Strutts’ annual report provides some insight into the connection between mental health issues and police lockups in post emancipation British Guiana.  For much of the period, local officials used these facilities as a substitute for asylums to deal with individuals suffering from mental health issues.  Even before the first official asylum in the colony began operations in New Amsterdam 1867, police lockups served as unofficial holding spaces for persons considered insane.

Post-emancipation British Guiana saw to the introduction of police stations strategically located at the edge of African Guyanese villages. These villages emerged on the colony’s Coastal Plane along the plantation belt from Essequibo to Berbice. For example, on the West Coast of Berbice, in the villages such as Hopetown there is Fort Wellington police station, at Blairmont there is the Blairmont police station at the front, at the intersection of Weldaad and Belladrum villages there is the Weldaad Police Station. This distinct pattern continued in Essequibo where there were the Stewartville, Den Amstel, Parika, Anna Regina and Aurora police station and for Queenstown there is Capoey. Throughout the colony’s capital and along the East Coast of Demerara, police stations were located at Kitty, Plaisance, Beterverwagting, Vigilance, police station is found at the edge of Buxton/Friendship, whilst there was Cove and John (at the boundary of Victoria, Nabacalis and Golden Grove), just to name a few (History Gazette, No. 71, 1971).  Because the administrators of British Guiana were struggling to deal with many of the social problems such as mental health in these villages and the rest of the country, these stations served as quasi-asylums for villagers who displayed signs of “insanity (Gramaglia, 2013).”

Having lost control over the freed people who bought plantations and became villagers, colonial officials stereotyped them as “problematic,” “raucous to law and order” and “belligerent.” Some villagers, who were maroons that came out of hiding after slavery ended, were labeled as “aggressive.” Their mental soundness was always in question whenever there were confrontations with the rural constables and colonial officials. Many were quickly labeled insane, which meant that they were a danger to others. Oftentimes it meant that they were detained for weeks in police lockups, without seeing the magistrate.

The villagers also regarded the police stations as an intrusion since the planters always used these institutions to persecute and control them. There are several instances of villagers being locked up for extended periods with due recourse of the law or on suspicion of their mental incapacity.  For instance, in 1855 two men from Buxton village were locked up at the Vigilance police station for three months, because the rural constables labeled them insane. The police stations were therefore a daily reminder of villager’s inequality and inability to challenge the powers that be (Gramaglia, 2013). It is because of these experiences that the police stations became alien to these communities.

Villagers also viewed rural constables in charge of these police stations with suspicion and fear (Danns, 1982). According to Allan Bent, the police in colonial society did not “exist to serve the expectations and needs of society;” (Bent, 1974) they were there to protect the colonizers. The result was further disdain for rural constables throughout British Guiana. The dislike also developed from the fact that the persons in charge of the police stations were white and although by the 1860s some rural constables were black; they were not creole blacks. Most of the rural constables were islanders, especially Barbadians. These circumstances only cemented the belief that such an institution was alien to the creoles (Danns, 1982).

Most police stations were unsuitable to detain anyone as events following the Angel Gabriel 1856 Riot, which began in Georgetown quickly advanced to the Berbice, demonstrated.  During the riot Portuguese shops in Belladrum, Blairmont and in many other villages were destroyed. However, in Hopetown many villagers prevented one particular shop, owned by L. Gonsalves, from being burglarized and raged. When the rural constables from Fort Wellington police station and reinforcements from the other stations arrived on the scene, they arrested everyone they found outside the shop, including those who were protecting the business.  Those arrested, including three “lunatics” as the report noted were locked up at Fort Wellington police station. Twenty-three persons (both males and females) got placed in the lockup together. It was built to accommodate only three persons at a time. Two women and two men were eventually convicted, and several villagers were fined (Guiana Graphic Newspaper, 1856). Further, the lockup was poorly ventilated, and the police station did not have the cells to accommodate such numbers. The two elderly men fell who fell sick got released. Examples like these widened the rift between the villagers and the rural constables for a protracted time.

Given the turbulent history that existed between the police stations, colonial officers, and the villages, Stipendiary Magistrate C.H. Strutt’s response to Georgie is no surprise. His attitude towards the young man’s state is indicative of the responses of villagers and many others in post-emancipation British Guiana. Whenever a villager portrayed mental health symptoms and other behaviors which were deemed troublesome, they were placed in the police lockups for periods ranging from a few hours to several days, until he or she “returned to their normal self.”

Rural constables during this era got no formal knowledge or training about mental health issues. The stigma affixed to persons suffering from such issues also gave the rural constables the “permission” to “brutalized” them. According to C.H. Strutt, upon his return his return to Fort Wellington police station days later, he enquired from Stipendiary Magistrate De Groot as to the welfare of Georgie.  Magistrate DeGroot reported that Georgie got a “sound thrashing” from the rural constable and “he quickly found his sanity and returned to the neighbouring village where he shares a house with his mother.”

Even the churches reached out to the rural constables to assist them in dealing with “lunatic” members of their congregation. In an 1853 report from St Michaels Church in, the catechist stated that it was a constant battle between himself and men from the neighboring village who were bent on disrupting Sunday morning church because of their “intoxication and lunatic behaviors.” He further noted that on two occasions he sent members of the congregation to Fort Wellington police station to get the rural constable who “promptly arrested the drunkard.” Later he found out that the congregant was not drunk but periodically would behave “irrationally even when unprovoked (HCPP, 1853).” In another report dated 1858, the catechist stated that church members identified three young men smoking “something” which was “highly repugnant to the nose” (the assumption here it might have been marijuana) behind the church building. They tipped off the catechist, when one man reacted to whatever he smoked by breaking the church windows. He was arrested, charged with vandalism, and locked up at Fort Wellington police station.

Persons who lived in proximity to these police stations and who suffered from any signs of mental illness were taken to the station houses. The responses of the rural constables and colonial officials were incarceration of the affected. This response for obvious reasons did not work and only worsened the mental state of the sick. British Guianas’ earliest asylum system to deal with the psychologically ill came into effect in June 1842. The system was part of Governor Henry Light’s social welfare project to ensure some form of common advancement in the colony. For many years, the conditions at the asylum were so unwholesome that the officials moved the structure. They eventually founded the “lunatic asylum in 1867 at Fort Canje near New Amsterdam, adjacent to the Berbice General Hospital (Gramaglia, 2003).”

Shammane Joseph Jackson is a research associate on the ESRC GCRF project Mental Health, Neurological and Substance Abuse Disorders in Guyana’s Jails, 1825 to the present day. She is also a lecturer in the Department of History and Caribbean Studies at the University of Guyana.